Big League Politics has reported about Acronym, the political organization that is behind Shadow Inc., the tech firm that made the faulty app that caused massive delays in reporting the Democrat results of the Iowa caucus.
Acronym is closely tied to South Bend, IN Mayor Pete Buttigieg and the failed campaign of Hillary Clinton, and it is funded by Silicon Valley oligarch Reid Hoffman. Hoffman has a history of funding shady social media operations, which makes it incomprehensible that a firm funded by him would be tasked with securing electoral integrity for the all-important Iowa caucus.
Hoffman, who founded the popular networking portal LinkedIn, has frequently funded campaigns to manipulate voters using technology. As the Democrats accuse the Russians of running disinfo ops to influence elections, one of their richest backers actually does it, gets caught doing it, receives with no repercussions, and is given an opportunity to do it yet again. Hoffman’s top henchman is Dmitri Mehlhorn, who used to promote privatization of schools before he joined the dark side.

Hoffman has also funded and promoted the political ambitions of Acronym CEO Tara McGowan, who is married to a Buttigieg campaign senior advisor.

She was once called “a weapon of a woman whose innovative tactics make her critically important to the Democratic Party,” but that weapon seemingly blew up in their faces in Iowa, and she is now under incredible scrutiny for her connections.

Welp, this Iowa voting app rabbit hole is getting crazy. There is a second company tied to this Shadow Inc company that reportedly developed the app. 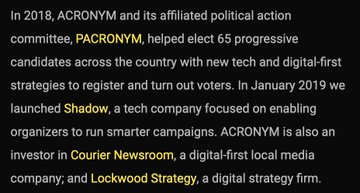 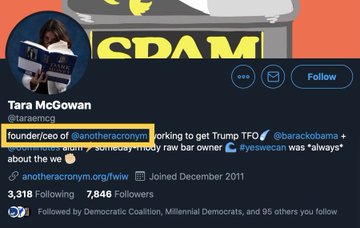 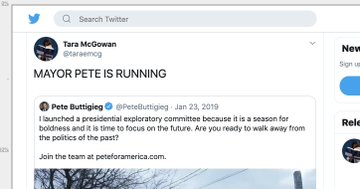 1:48 AM – Feb 4, 2020
Before the Iowa caucus, Hoffman’s most infamous political dirty trick was his funding of Project Birmingham. This project used social media to spread disinformation on social media to damage the campaign of U.S. senate candidate Judge Roy Moore, who was hammered with false accusations that ended up costing him the seat in the Dec. 2017 special election.
The Washington Post reported Hoffman’s involvement in Project Birmingham in Jan. 2019 long after the damage was done:
Project Birmingham got its funding from Internet billionaire Reid Hoffman, who emerged as a leading underwriter of Democratic causes after the 2016 election … Hoffman gave $750,000 to a progressive technology start-up called American Engagement Technologies — founded by Mikey Dickerson, a former Obama administration official … This person said Dickerson used $100,000 of that to hire New Knowledge, a Texas-based social media research firm, to work in Alabama in support of Jones during the special election in December 2017.
The Project Birmingham campaign enlisted thousands of bots to follow Judge Moore on social media in order to capitalize on hysteria about the Russians and tie it to Moore’s campaign. It was done to “radicalize Democrats, suppress unpersuadable Republicans (“hard Rs”) and faction moderate Republicans by advocating for write-in candidates,” according to the Project Birmingham Debrief that outlined the Hoffman-backed black op.
“This fraud and interference was evident during the 2017 U.S. senate election when tens of thousands of Russian bots were programmed to follow the Republican candidate on Twitter to make it appear as if his campaign was being backed by the Russians,” Alabama Republican State Rep. Andrew Sorrell said to Big League Politics about Project Birmingham.
Hoffman was forced to accept his culpability in the electoral interference operation in Dec. 2018 and apologize for his organization’s devious acts.
“I find the tactics that have been recently reported highly disturbing. For that reason, I am embarrassed by my failure to track AET – the organization I did support – more diligently as it made its own decisions to perhaps fund projects that I would reject,” he said.
Hoffman’s shenanigans were unfortunately successful in Alabama in 2017, and they may have been successful in Iowa as well if it ends up that turning the caucus into a grueling nightmare was the plan all along.
READ MORE ON THE SOURCE LINK AT TOP, I WAS NOT ABLE TO COPY ALL THE INFO AND POST IT HERE.