That other plot – to bring down Trump

Pat Buchanan: ‘The real indictment here is of the American political system.

PATRICK J. BUCHANAN About | Email | Archive
Well over a year after the FBI began investigating “collusion” between the Trump campaign and Vladimir Putin, Special Counsel Robert Mueller has brought in his first major indictment.

Trump campaign manager Paul Manafort has been charged with a series of crimes dating back years, though none is tied directly to President Donald Trump or 2016.
Read more at http://www.wnd.com/2017/10/that-other-plot-to-bring-down-trump/#PkJPXWPGLR2Rg91Z.99

With a leak to CNN that indictments were coming, Mueller’s office stole the weekend headlines. This blanketed the explosive news on a separate front, as the dots began to be connected on a bipartisan plot to bring down Trump that began two years ago.

And like “Murder of the Orient Express,” it seems almost everyone on the train had a hand in the plot.

Then it was that the Washington Free Beacon, a neocon website, engaged a firm of researchers called Fusion GPS to do deep dirt-diving into Trump’s personal and professional life – and take him out.

A spinoff of Bill Kristol’s The Weekly Standard, the Beacon is run by his son-in-law. And its Daddy Warbucks is the GOP oligarch and hedge-fund billionaire Paul Singer.

From October 2015 to May 2016, Fusion GPS dug up dirt for the neocons and never-Trumpers. By May, however, Trump had routed all rivals and was the certain Republican nominee.

So the Beacon bailed, and Fusion GPS found two new cash cows to finance its dirt-diving – the DNC and the Clinton campaign.

To keep the sordid business at arm’s length, both engaged the party’s law firm of Perkins Coie. Paid $12.4 million by the DNC and Clinton campaign, Perkins used part of this cash hoard to pay Fusion GPS.

Here is where it begins to get interesting.

In June 2016, Fusion GPS engaged a British spy, Christopher Steele, who had headed up the Russia desk at MI6, to ferret out any connections between Trump and Russia.

Steele began contacting old acquaintances in the FSB, the Russian intelligence service. And the Russians began to feed him astonishing dirt on Trump that could, if substantiated, kill his candidacy.

Among the allegations was that Trump had consorted with prostitutes at a Moscow hotel, that the Kremlin was blackmailing him, that there was provable collusion between the Trump campaign and Russia.

In memos from June to October 2016, Steele passed this on to Fusion GPS, which passed it on to major U.S. newspapers. But as the press was unable to verify it, they declined to publish it.

Steele’s final product, a 35-page dossier, has been described as full of “unsubstantiated and salacious allegations.”

Steele’s research, however, had also made its way to James Comey’s FBI, which was apparently so taken with it that the bureau considered paying Steele to continue his work.
Read more at http://www.wnd.com/2017/10/that-other-plot-to-bring-down-trump/#tFrt3C0VjcFc7UUI.99

“The idea that the FBI and associates of the Clinton campaign would pay Mr. Steele to investigate the Republican nominee for president in the run-up to the election raises … questions about the FBI’s independence from politics, as well as the Obama administration’s use of law enforcement and intelligence agencies for political ends.”

The questions begin to pile up.

What was the FBI’s relationship with the British spy who was so wired into Russian intelligence?

Did the FBI use the information Steele dug up to expand its own investigation of Russia-Trump “collusion”? Did the FBI pass what Steele unearthed to the White House and the National Security Council?

Like the reporting you see here? Sign up for free news alerts from WND.com, America’s independent news network.

Did the Obama administration use the information from the Steele dossier to justify unmasking the names of Trump officials who had been picked up on legitimate electronic intercepts?

In testimony before the Senate Intelligence Committee, Clinton campaign chair John Podesta and DNC chair Debbie Wasserman Schultz claimed they did not know that Perkins Coie had enlisted Fusion GPA or the British spy to dig up dirt on Trump.

Yet, when Podesta testified, the lawyer sitting beside him in the committee room was Marc Elias of Perkins Coie, who had engaged Fusion GPS and received the fruits of Steele’s undercover work.

Here one is tempted to cite Bismarck that, if you wish to enjoy politics or sausages, you should not inquire too closely how they are made.

Thus we have Free Beacon neocons, never-Trump Republicans, the Hillary Clinton campaign, the DNC, a British spy and comrades in Russian intelligence, and perhaps the FBI, all working with secret money and seedy individuals to destroy a candidate they could not defeat in a free election.

If future revelations demonstrate that this is what went down, it is not only the White House that has major problems.

If you wish to know why Americans detest politics and hate the “swamp” that has been made of their capital city, follow this story all the way to its inevitable end. It will be months of unfolding.

The real indictment here is of the American political system, and the true tragedy is the decline of the Old Republic.
Read more at http://www.wnd.com/2017/10/that-other-plot-to-bring-down-trump/#tFrt3C0VjcFc7UUI.99

Link to All JFK Assassination Files 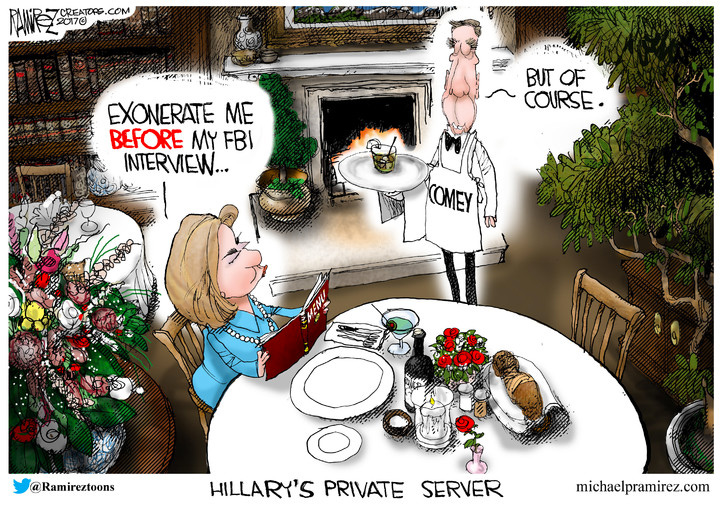 Because the Clintons are guilty of the crimes the elites are accusing Trump of committing, it’s likely the criminal couple will soon suffer the same fate as Harvey Weinstein to make the persecution of Trump not seem “political.”

Already the mainstream media, which one year ago promoted Hillary Clinton as a “glowing goddess,” is slowly but surely publishing headlines linking the Clintons to the Russian Uranium One scandal.

This suggests that the globalists in control of mass media are fixing to dump the Clintons much like how Harvey Weinstein was burned, albeit the latter for sexual improprieties instead of political scandals.

Just look at this article from The Hilldemanding a “special counsel on Hillary Clinton’s Russia scandal:”

There was more than enough smoke for the FBI to investigate official government favors in exchange for big donations to the Clinton Foundation, but agents ran into a hyper-politicized Attorney General in Loretta Lynch, whose public integrity section said it ‘did not have enough evidence to move forward,’ according to Washington Post in October 2016.

Last week, blockbuster allegations surfaced in The Hill shedding light on what was happening inside the Obama administration and FBI while Russia was seeking control of massive amounts of our uranium supply. It turns out that the Obama administration inexplicably approved the uranium deal with Russia even though the FBI was investigating a massive corruption scheme that included bribery, extortion and other felonies involving Russia’s nuclear energy industry in the United States.

This level of accurate reporting, at the expense of the Clintons, is unprecedented for The Hill, which was once a major Clinton cheerleader.

Of course, accurate reporting has never been the mainstream media’s modus operandi.  So what’s the real gameplan here?

Easy: to sacrifice the Clintons to advance the anti-Trump agenda.

Remember, the power elites have no real loyalty to the Clintons. The Clintons served them, not the other way around, and now the crime duo is presenting a problem because the Clintons are guilty of just about everything they’re accusing Trump of doing.

So here’s what’s likely their next move: Burn the Clintons for their crimes to set a precedent to accuse Trump of similar criminality while claiming it isn’t politically motivated.

This is exactly what they did with the Weinstein scandal, and remember at one point the fallen producer was seen as “untouchable” just like the Clintons.

But will it work? Unlikely.

President Trump simply lacks the criminal nature of the Clintons, and the mainstream media lacks the influence to manipulate the public into believing otherwise.

This is one of the few plays the elites still have left, but considering that their playbook is obsolete, what difference at this point does it make?